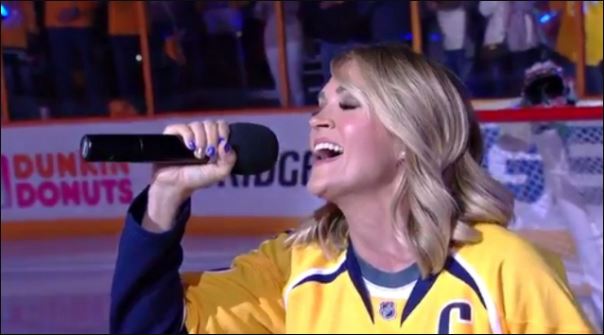 Gotta Hear It: Carrie Underwood belts out anthem in Nashville WATCH VIDEO BELOW:

Carrie Underwood surprised Nashville Predators fans assembled at Bridgestone Arena for Game 3 of the team’s Stanley Cup Playoffs series against the Chicago Blackhawks on Monday night (April 17) by performing the National Anthem prior to the start of the game. Readers can press play above to watch Underwood’s performance.

For her performance, Underwood donned her husband Mike Fisher’s jersey. After she concluded “The Star-Spangled Banner,” the country star was joined by Nashville Mayor Megan Barry on the ice, and together, they waved Predators rally towels above their heads.

Fisher, whom Underwood married in 2010, has been with the Nashville Predators since 2011, when he was traded from the Ottawa Senators. In a December article for the Players’ Tribute, Fisher detailed how that trade changed his life: In the story, he admits that spending the first few months of married life working from different cities “wasn’t easy,” so he felt “incredibly blessed” to have been traded to Nashville — a move that the Senators’ team owner told Fisher was intentional.

“They could have traded me anywhere, but they were genuinely looking out for me and my family,” Fisher writes. “That’s what makes hockey such a special sport, even at the NHL level. Yes, it’s a business, but the amount of good human beings I’ve run across in this sport is just incredible.”

Fisher was named Predators team captain at the beginning of the 2016-2017 NHL hockey season. The team has played in the Stanley Cup Playoffs for the last three seasons, including 2016-2017. 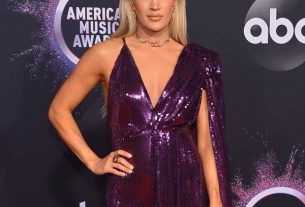 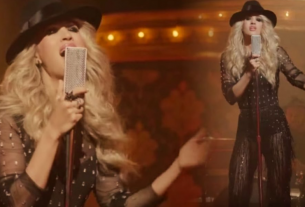 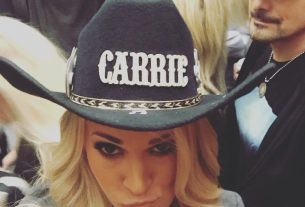